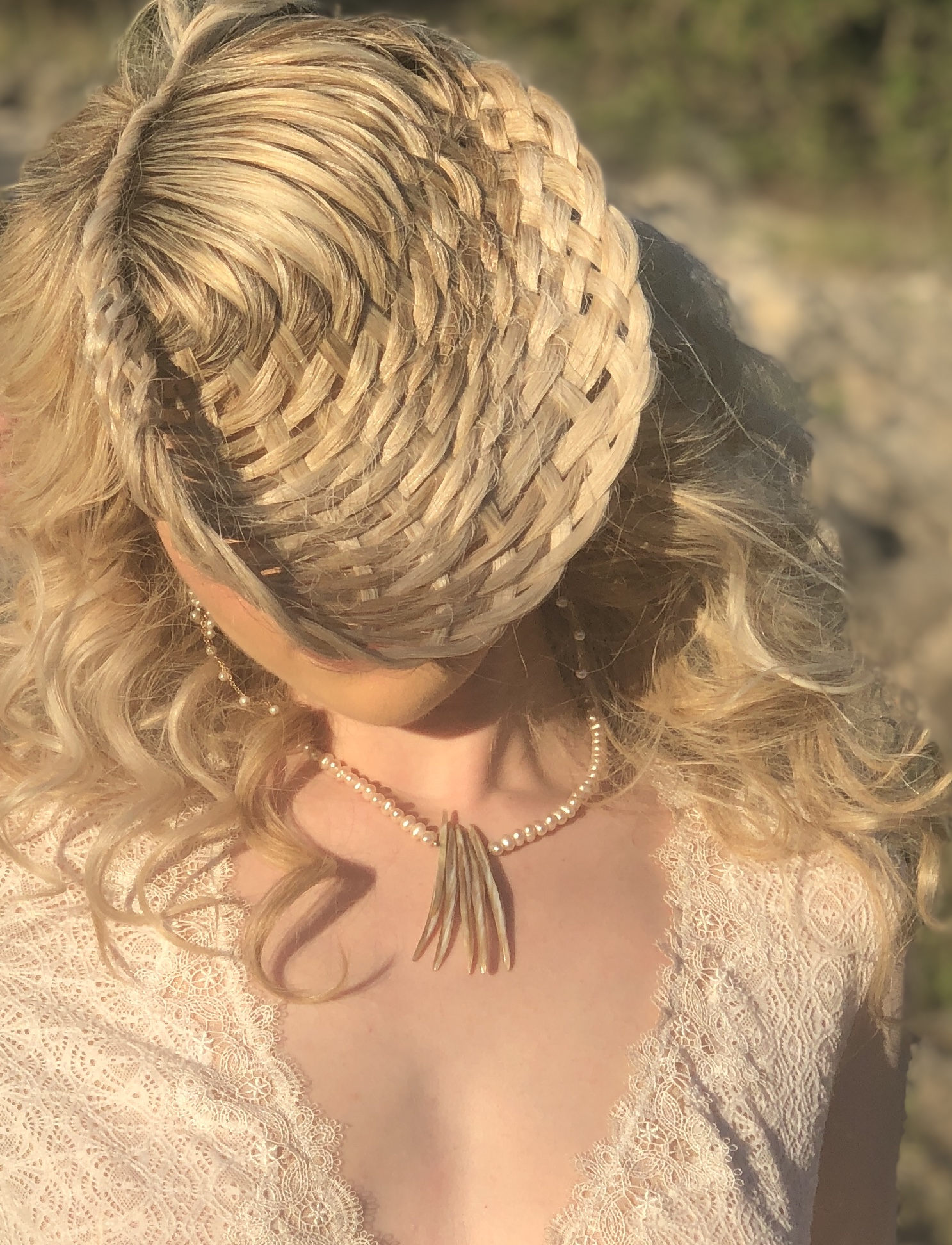 “You could say she does magic with a pair of scissors, but the real secret, the ME Salon owner says, is in the consultation. McCarthy gleans as much information as possible from her clients then suggests and creates a style that is often, well, perfect. It’s no wonder she has a packed client list that travel from around the nation to her Northwest salon-tique. The result is urban chic with Texas charm. Country views with modern style.

“McCarthy may be a veteran, but she isn’t stuck in the past. She’s constantly learning the new tricks of the trade. McCarthy herself graduated both beauty school and Mims High School at 17. By 21, McCarthy had opened her first salon. A few years later, she expanded to a nearly 4,000-square foot salon and spa. Eventually, she sold it to devote more time as a mom. As her boys grew older, she worked part time, then opened ME Salon.”

Kim is dedicated to her clients and employees. She is constantly teaching and sharing her knowledge with the other stylists to broaden their education.

Mary Thomas graduated from the Aveda Institute in Los Angeles, CA in 2015.

After graduation, she moved back to San Antonio, Texas to be closer to family. We are very happy to have her as one of ME Salon’s stylists for 6 years now.

Mary is a single mom to a bubbly toddler named Graham. Mary loves being in the sunshine; especially the mountains, and considers herself a nature lover with a calming spirit. Her mom has always encouraged her to be artistic and creative, and she hopes to instill the same ideals in her son. She is educated in all areas of hair artistry, but her greatest passion is hair color transformation. Balayage and highlights being at the top of her skills list, she’s a foil queen!

She loves making other women feel confident and beautiful in their own skin.

“What you think, you become. What you feel, you attract. What you imagine, you create.”

Client satisfaction is my goal. I strive to make sure my clients feel confident in my ability to meet their expectations.

Before any service, a thorough consultation is provided in order to find the vision my guest has in mind. I want my clients to walk away feeling beautiful, satisfied and confident every time they leave my chair.

Although I enjoy doing all styles, I really love the chance to do drastic makeovers and color corrections.  Book with me today!

Graduating from Paul Mitchell, training under Master Hairdresser Kim McCarthy, and traveling through Europe, Mikayla is cultured and skilled in all aspects of hairdressing. Book with her today!

Melisa Alcaraz studied at the Aveda Arts & Sciences Institute of San Antonio and is Aveda certified. She has 5 years experience and specializes in long layered haircuts, color corrections, and balayages. Growing up by the beach in California, she loves the sun-kissed hair look, which inspires her balayages today. If you’re looking for a Spanish speaking stylist, Melisa is the gal for you! Melisa also enjoys painting and bike rides through Austin or around her neighborhood!

Emily Cleveland is a Texas Native who has been doing hair for 11 years. She specializes in highlights, balayage, and texturized cuts. Her passion is helping people feel amazing. “ Sometimes a fresh cut of color is just what you need to tackle the world. When your hair looks great, you feel better! When you feel better, you do better. Spread that hoot feeling, share that smile! If I can brighten even one person’s day that sits in my chair, that’s a successful day for me.” In her free time, Emily enjoys hanging out with her husband and two mutts. She enjoys drawing, painting and crafting. Her artistic side is often evident in her bright colorful hair. If you are looking for a fresh new look, she’s more than happy to help!

Stephanie Johnson studied at the Aveda Institute in San Antonio. During her apprenticeship she studied under two prestigious L’oreal educators that led her to Miami and Austin. When she is not at the salon, Stephanie loves being a mom, cooking, gardening, traveling, being outdoors and reading.

Kylie Jamerson graduated from the Aveda Institute in San Antonio. She is our newest stylist with one year of experience but major talent! Growing up in a salon, Kylie has been around the industry since she was very young. She comes from a long line of hairdressers and has a gift for transforming hair. Kylie is currently looking for models for highlights and balayages. Kylie loves her cat, listening to podcasts, experimenting with makeup, styling, and setting hair trends.

Carmen Spivey graduated from the Aveda Institute in 2006. She has spent the last fifteen years specializing in hair color exclusively at Avant Garde in Austin, TX. After closing their doors in 2021 she returned home to San Antonio and joined the ME Salon Family.

“Color has been in my blood since birth,  growing up in a colorful Guatemalan town. I see the the world more in shapes and color than I do defined objects. I started my path in color as a decorative painter and soon discovered my passion for hair.”

“After fifteen years mastering my craft I am just as in love as I have always been and enjoy continuing to learn the latest trends. I pride myself on bringing your vision to life and its my pleasure to have you in my chair as we co-create your masterpiece together.”

Her work can be viewed at @icolorsatx.  Come see Carmen for balayage, hilites, airtouch, color corrections and/or color balance.

Internationally recognized hairdresser / educator, Bobby Maloy has cut hair on stage in multiple countries, and educated stylists from Miami to Tokyo. He has worked with Paul Mitchell, Bumble & bumble, R+Co, Aveda, Privé, and currently Cruxe™, V76, and Oribe. Some of his achievements include: